As always, we at Dawn the Pet Nanny LLC like to keep you informed on any pet food recalls. Mars Petcare US  has announced an expanded dog food recall as of today, August 31, 2014.

Per Mars Petcare US the following dog food is being recalled:

August 31, 2014 – Mars Petcare US has announced it is expanding last week’s voluntary recall of Pedigree Adult Complete Nutrition dry dog food due to the possible presence of a foreign material.

However, it now is being expanded to include 55-pound bags of Pedigree Adult Complete Nutrition dry dog food products sold inSam’s Club in Indiana, Michigan and Ohio.

Bags may contain small metal fragments which could have entered the packages during the production process. The foreign material is not embedded in the food itself yet may present a risk of injury if consumed.

Pedigree Adult Complete Nutrition dry dog food in 55-pound bags sold at Sam’s Club will have the lot code 432E1KKM03 printed on the back of the bag near the UPC and a Best Before date of 8/7/15.

The affected 55-pound bags were sold between August 14 and August 30 at Sam’s Club in the following locations: 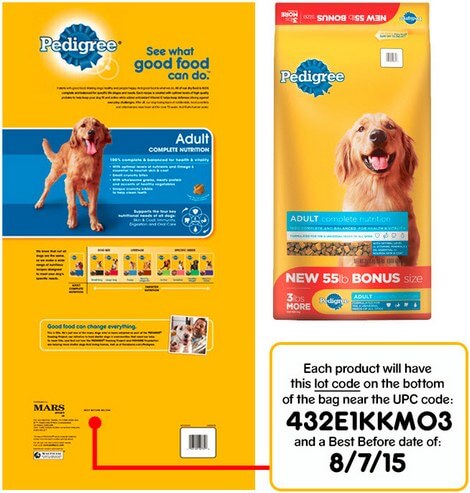 Pedigree Adult Complete Nutrition dry dog food in 15-pound bags sold at Dollar General stores will have the lot code 432C1KKM03 printed on the back of the bag near the UPC and a Best Before date of 8/5/15.

Affected 15-pound bags were sold between August 18 and August 30 at Dollar General stores in the following locations: The company has received no reports of injury or illness associated with the affected product.

Consumers who have purchased the affected product are advised to discard the food or return it to the retailer for a full refund or exchange.

U.S. citizens can report complaints about FDA-regulated pet food products by calling the consumer complaint coordinator in your area.

Canadians can report any health or safety incidents related to the use of this product by filling out the Consumer Product Incident Report Form.